If you live in our luxury Chicago apartments, then you’ll be pleased to know that you live in a city that has given the world some of the most practical, novel and fascinating inventions we have today! From tasty dishes to kitchen appliances to life-saving medical practices, Chicago has been the debut city for many of the inventions we rely on today.

You’ll notice that many of the inventions credited to Chicago innovators came about as a result of the 1893 World’s Columbian Exposition, also known as the Chicago World’s Fair. This exposition, which was attended by over 27 million visitors from all around the globe, was a highly-influential cultural event that had a great impact on architecture, art, food, innovation and the overall industrial climate in the United States. The Chicago World’s Fair was where new inventions were displayed for all the world to see, and that’s partly why those inventions took off the way they did. They had a world stage to be displayed upon.

Because there are so many inventions that debuted in Chicago, we’re going to narrow down the list to some of the meals, dishes and restaurants that started in Chicago. Try not to get too hungry! 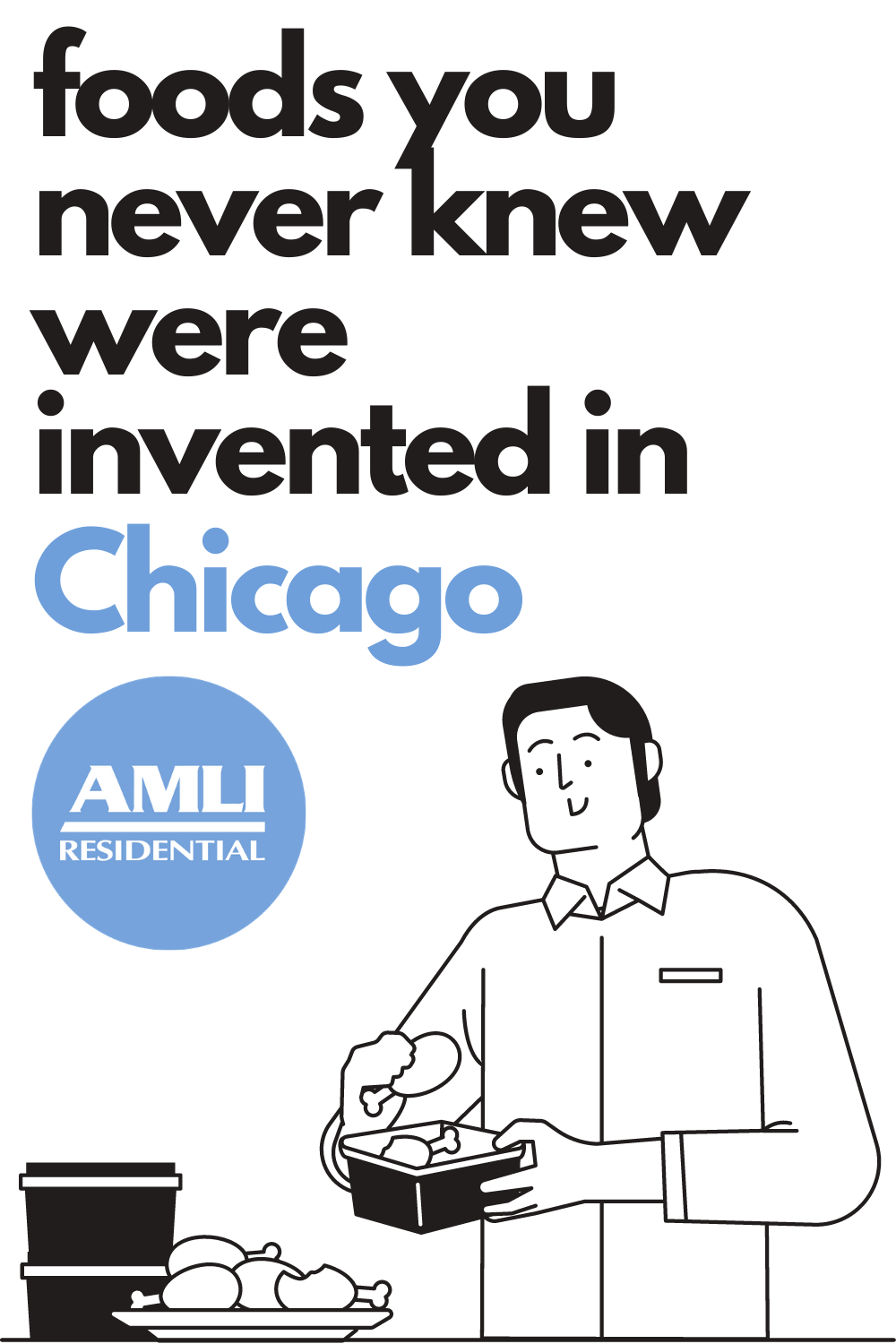 This iconic dish first made its appearance in the mid-1940s, and boy, are we glad! There’s nothing like a deep dish pizza, and if you want to learn more about this gooey meal’s origin, check out our article here!

It’s pretty self-evident that the Chicago-style hot dog was invented in Chicago, but the history behind the dish is a perfect representation of how cultures blended together in the early days of Chicago. The first hot dogs debuted around the time of the World Fair, and soon the dish evolved into the Chicago staple we know today. Check out this article to find out more about all the influences that went into making this iconic dish.

You can thank Bertha Palmer, a prominent socialite and the head of the World’s Fair Board of Lady Managers, for coming up with what we know today as the brownie. Bertha wanted to make a dessert that was easy to transport, but that still contained a cake-like quality. Her husband owned Palmer House Hotel, so she instructed the chefs there to come up with a recipe she could use, and the hotel has been making the iconic brownies ever since. You can taste these original brownies (recipe included in link!) at both of the Palmer House Hotel’s restaurants, which are just a few minutes’ walk from our River North Apartments!

And this is exactly how the very first brownie was served (with cherry-Walnut ice cream, blackberries, blueberries, strawberries, an apricot glaze and chocolate sauce) here at the Palmer House Hotel. It was created by Bertha Palmer, a super progressive and feisty lady who went on to be the first woman to manage a hotel among other things. #palmerhousehotel #berthapalmer #likeabosseveryday #ladyboss #brownie #dessert #thefirstbrownie

Remember when Twinkies disappeared for six months? The world was a dark, dark place then, and we caught a glimpse of what life was like before the original Twinkie made its way onto our plates and into our hearts in the early 1930’s.

Twinkies first appeared in 1930 when an Illinois manager of the Continental Baking Company (which owns both the Wonder brand and the Hostess brand) concocted a shortcake dessert filled with a vanilla cream mixture. This was done in part so that unused shortcake pans could be used again, and the vanilla filling was an affordable choice in the times of World War II rationing. The name was said to have been inspired by a billboard for Twinkle Toe Shoes that was close to the factory, and the catchy name has stuck ever since!

Twinkies have since played a large part in United States pop culture, and the sugary treat has been a staple of many children’s childhoods since its invention nearly 90 years ago. It’s such a household name, in fact, that President Bill Clinton included a Twinkie in the 1999 National Millennium Time Capsule as a representation of the country’s food culture of the time (let’s be honest, it will probably stay preserved just fine until the capsule is opened at the dawn of the 22nd century).

There are some flavors that don’t sound like they should go together, but when you combine them they are surprisingly good!

This is the exact case with the Original Rainbow Cone. This ice cream cone is a five-scoop-tall concoction that has been a popular Chicago staple since 1926 when its inventor, Joseph Sapp, created the dessert with his wife. Sapp loved ice cream, and when he opened his first ice cream stand on 92nd, he was determined to create an ice cream with the perfect flavor combination.

The Rainbow Cone consisted of a colorful tower of five flavors: chocolate, strawberry, Palmer House (New York vanilla with cherries and walnuts), pistachio and, finally, orange sherbet. The combination of flavors, colors and textures made the Rainbow Cone a major hit to Chicagoans, and the ice cream has been unchanged ever since.

Come get a taste of our generational ice cream that’s been served since 1926! 😊 Our truck is open today and tomorrow from 4-10PM @buonabeef in GLENDALE HEIGHTS. 📍305 Army Trail Rd. Glendale Heights, IL 60139 📸 @niralibchauhan

A post shared by Original Rainbow Cone (@theoriginalrainbowcone) on Jul 30, 2020 at 9:19am PDT

The Italian beef sandwich dates back to Italian immigrants who arrived in Chicago in the early 1900s (the same community that the deep dish pizza originated from!). Workers in the stockyards would collect tough pieces of meat that couldn’t be sold, and instead of throwing the meat away, they would bring it home to their families. The meat would be thinly sliced, rubbed in spices and serves it on bread rolls. It was an affordable meal and was popular among the working class, and soon it started getting served at food stands around the city. Now, the sandwich is a Chicago staple!

Next time you’re munching on a deep dish pizza, baking some gooey brownies or craving some good old-fashioned Hostess snacks in your luxury Chicago apartment, remember that you live in the center of the many culinary inventions that have become a part of our everyday lives around the country!

History of The Best Wines In Texas

Most Popular White Wines in California